Since August 2017, the ATFP has gone from strength to strength. Here you can meet the team! Feel free to ask them any questions about any thing fantasy relevent by using their twitter handles. 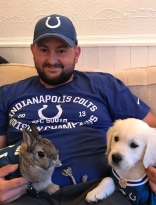 Rob always wanted to have his own website and podcast where he could let loose all of  his opinions on fantasy football and all things NFL. Now he is the coordinator of a finely assembled team that produce awesome content throughout the year. As a self confessed American sport obsessive fanatic, he enjoys watching anything with a ball or puck. His teams include Indianapolis Colts, Edmonton Oilers, Toronto Blue Jays with Norwich City and Barcelona as his soccer teams. In his personal life, he lives in his newly purchased house with his wife Becky, Dobby the Dog and Luna the Rabbit.. all are Colts fans (see pic!). He works as a Greenkeeper at his local golf course and is working towards being a Head Greenkeeper or Head Groundsman, as long as it involves grass and professional sports!

Jamie hails from Waterloo, Ontario and loves anything remotely sporty. Soon to be married and Dad to one awesome little dude. Sports teams include Detroit Red Wings, Dallas Cowboys, and the Toronto Blue Jays. When ‘Zee’ isn’t editing articles or keeping Rob in check on the podcast he hosts his own fantasy Hockey podcast called 5-on-5. Jamie started out writing his own blog about fantasy football called The Pigskin Clipboard where funnily enough, Rob was a contributor. Jamie used to work for the FNTSY Network so is a good contact to have in the fantasy industry!

Adil is a self-confessed sports addict known to regularly watch NFL, football (soccer), rugby union, tennis, Formula 1, cricket; sometimes all in the same day! He is the greatest thing to come out of Staines (move aside Ali G) and currently works for a supercar manufacturer as an engineer. In his spare time when not writing/editing for ATFP or watching sport, he finds himself pitchside photographing his local non-league team. As for the sporting teams he supports, they are the Indianapolis Colts, Newcastle United and the Chicago Cubs. If you’re fortunate enough to follow him on twitter you’ll see the level of sports fanaticism he has as it’s all he tweets about!

Andy is a huge football fan in both US and UK meanings of the word. He’s originally from Birmingham (yes he has the accent to prove it!) but now he lives and works in London as a civil servant. He’s a massive Dolphins fan, with a strongly misguided view that the Belichick and Brady era is coming to an end in the AFC East. He’s also really into college football, particularly FSU, and for that reason you’ll often see him hyping Jameis Winston and the Buccs! He strongly believes that the American game is ever-growing in the UK, and loves what the NFL is doing by spreading the action worldwide.

Tyler is a husband and father of four boys. He hosts a podcast on YouTube with his eldest son, Eli, called The Tyler and Eli Fantasy Football Tips Podcast.  Tyler has been playing fantasy sports for over 20 years – ranging from football, baseball, to golf and NASCAR. Lately he has narrowed it down to predominantly football. Tyler enjoys reading and writing about football. His favorite teams are the New York Yankees, New York Giants, Philadelphia 76ers, New York Rangers, and Manchester United. Tyler is also a sucker for a good water bet. So send some his way!

Josh is a Football Nerd. The first game he remembers was a Packer game that he watched on a tiny fuzzy color screen as a kid. He collected football cards and watched intently every Sunday when his dad would let him. In fact, as long as chores were done, every football game got watched! He played center, defensive tackle, and long snapper in High School. They hit the playoffs 3 out of the 4 years he played. Made Captain his senior year too! Josh played lacrosse in college and is a retired Staff Sergeant and 14-year veteran from the Army. He worked as a Freight Conductor for Canadian National Railway for 6 years and is a die-hard Packers fan, 13x World Champs of course! He is currently a Policy Processing Tech for Harley Davidson Insurance.

Lawrence is a husband and father of two girls. He has worshipped the NFL since seeing an American Express advert in 1985 on Channel 4 featuring Tom Landry and a bunch of men dressed in shoulder pads. Lawrence’s claims to football fame include being on the staff (statistician and reporter) of the 1993 London Olympians, who went on to win the EuroBowl at Heysel Stadium in Belgium. Lawrence has been to 17 NFL games in London (starting in 1988), the 1991 World Bowl, and six NFL stadiums (San Francisco, San Diego, Oakland, Miami, Tampa Bay, and Washington).

He has played Britball, scoring a lone touchdown as a tight end for the Crawley Raiders, and was a player-coach for the Birmingham Raiders adult flag team. Lawrence is a fantasy football addict running an average of 40, yes 40, fantasy teams a year. For the past decade, he has also been the commissioner of two 16-team 55-man roster leagues that play head-to-head live games over the internet. Lawrence once spent the day with Hall of Fame offensive tackle Ron Mix, who when he asked for an autograph asked for his wife’s name. The autograph read ‘Dawn thank for the great sex – Ron Mix’. Lawrence also collects digital NFL cards and competes on the Topps Huddle app and occasionally buys some real cards too.