The new league year is less than a month away, and we are currently biding our time quenching our thirst for NFL football with number crunching sessions and daydreams of free agent signings and draft selections. On a side note – if these options haven’t fulfilled your needs, I strongly suggest giving the AAF a try, it has been fun to watch within the season’s first few weeks, believe it or not.

Driving home from work last week I found myself trudging through the February snow, at a snail’s pace, behind miles of cars in another one of Wisconsin’s wonderful snow storms. I knew it was going to take a while longer than usual, and I wanted to get back into writing for the upcoming season – so I began to think of what my first article of 2019 should look like.

I wanted to establish my approach to Dynasty Fantasy Football. My processes particularly, so I asked myself; how would I convey this to a reader? I kept remembering all the crazy moves and aggressive trades I had made over the last couple of years – an organized chaos of sorts, that led to my first home league title in 2018. How would I even begin to explain how my thought process took my roster from a startup to a title, which even included a fully-fledged rebuild?

I decided to focus on the ancillary moves that created the ‘ever-changing’ depth to my roster. This is how I would show people that aggressive outside the box thinking can be rewarded.

Don’t get me wrong, I am aware of the mistakes that can be made with this approach and have tried to hold myself more accountable and maintain patience. One mistake I made was sending Juju Smith-Schuster for Tevin Coleman during Week 2 of the 2018 season. Can’t live that one down. 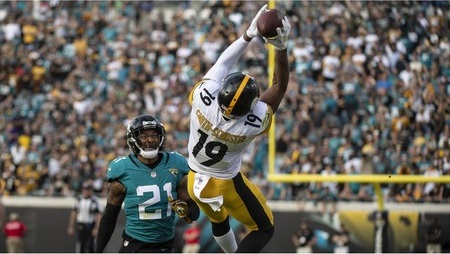 When I first started playing Dynasty Fantasy Football, I tried to emulate other owners. I felt pressed to make moves – maybe even when I didn’t need to. I soon learned you don’t always have to stick to ‘the way everyone else does it’.

My team, ‘Watson and Mahomes, LLC.’ Had certainly received scrutiny from fellow owners within the league. I made the playoffs in the league’s first two seasons with the help from Devonta Freeman and Deandre Hopkins and was quickly dismissed in each of the 1st rounds.

I started a fire sale and moved every valuable piece I could for youth and picks. In the 2017 Rookie Draft, I selected Dalvin Cook, Patrick Mahomes, and Smith-Schuster. This was the start of my entire rebuild which included a last-place finish in 2017. After the 2nd preseason game of the 2017 season, I sent Marcus Mariota and Eddie Lacy, a few 2018 3rd and 4th round picks for Deshaun Watson and Jamaal Williams.

Moves like that, risk-taking, is how I approached the rebuild. With the previous year’s last place finish, I entered the 2018 draft with the 1.01… which I then traded away (Saquon Barkley) for three 2018 first rounders who ended up being Derrius Guice, Sony Michel, and Josh Rosen. 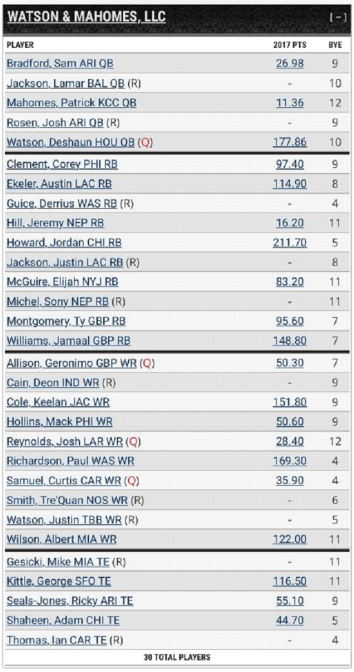 You’ll notice a significant amount of change across the roster when you compare this version to the next. Multifaceted is a term that could be used to describe my approach, where I try to build a roster that has the main goal of competing now and still has long term power.

This cannot be explained through one separate process though, but rather a conglomerate of moves that collectively display my style. Throughout the 2018 Fantasy regular season, just on this roster alone, I owned shares of Le’Veon Bell (I sent a 2019 1st, Lamar Jackson, Jordan Howard, and Corey Clement for Bell, Alshon Jeffrey, and Devin Funchess) Jarvis Landry, Chris Herndon, and a few others.

This is when I realized that I had a legitimate shot at a playoff berth, so I used those pieces to gather up momentum for the stretch run i.e. I moved Le’Veon Bell and Jarvis Landry for Adam Theilen and Spencer Ware. In a vacuum, some of these moves are considered less than desirable – but at this point in the 2018 season, Theilen was a WR1 and Spencer Ware had just been handed the keys to the Kansas City backfield. Conversely – Bell held out all of 2018, and Landry was a rollercoaster with a young team who surely would draft a WR1 in the 2019 draft.

Believe it or not, I scooped Eric Ebron for 10% of my FAAB just before week one. Even though he floundered in Detroit, I sat and thought about it – I realized that I had never seen a Tight End of fantasy relevance in Detroit at all, so purely from a talent perspective – I thought he was worth it.

Backtracking for a bit, I snagged both James Conner and Jaylen Samuels that week as well for pennies, turned out to be a masterstroke type week! I didn’t know Bell would hold out for all of the season, but I thought the possibility of early season production from Conner, was worth the roster spot. I shipped off Sony Michel and a 2020 1st rounder which was, by chance, right before his second knee scare (against Chicago), for Corey Davis (I am a believer in the talent) and a 2019 2nd.

After consistent roster scrubbing, add/drops, trades and the like, this is what the team looked like a week or so before our playoffs started;

Over the next week which included another waiver roll, I made a couple more moves. I dropped Malcolm Brown (who shortly thereafter, was shelved for the ROS), and traded a 2019 3rd round pick for Jaylen Samuels, with questions encircling James Conner’s health. I was a fan of Samuels, and as I mentioned earlier, I had him rostered for a few weeks to begin the year – but nonetheless, I was more than ready to pay up to reacquire him with the possibility of a deep playoff run.

I watched Spencer Ware and he seemed to play well enough against the Raiders following Kareem Hunt’s release, so I demanded him in the Theilen trade. However, I still wanted depth should something have happened to him.

Believing in your judgment

I listened to multiple podcasts throughout the 2018 Calendar year, and even more so during the regular season. Many experts seem to always talk about acquiring depth pieces that were a part of prolific offenses, the Chiefs certainly fit that bill. After scrubbing my roster and watching Darrell Williams get scooped by another owner, I thought I needed to jump – I dropped Keelan Cole and added Damien Williams.

I had written a piece earlier in the year and did a bit of research on Damien Williams, I knew he was a capable pass catcher and was even handed the job in Miami after Jay Ajayi was traded – if he had never got hurt (Kenyan Drake’s breakout happened) – he might still be the lead back in the Dolphins backfield.

Elijah McGuire was someone I watched play for the Ragin’ Cajuns in the New Orleans Bowl in 2016 and I was excited when he fell into my lap in the 5th round of the 2017 rookie draft. Here was a well-rounded back from a lesser conference, capable of carrying the load (on 840 total college touches he averaged 6.8 yards from scrimmage and scored 52 touchdowns). His rookie year he flashed some but was stilled mired in a committee behind Bilal Powell and others.

When the Jets brought in Isaiah Crowell, I thought he could become a lost cause. Then, with the preseason injury and subsequent I.R. designation to return – I thought I might be able to drop him and scoop him up before he was activated.

Don’t bite at every offer

Both Deshaun Watson and Jamaal Williams have been on my roster since that original trade in 2017, and I haven’t moved either since. Early in 2018, I received an offer for Jamaal Williams and my 2018 1.03 for Joe Mixon. Great offer I thought, but I didn’t bite.

At the time I wasn’t very optimistic with Cincinnati’s offense, and although Mixon is a great talent, there was something I felt good about having the RB2 for Green Bay on my roster. Another unknown and more of a hold in case something happens type of acquisition. There was no way I could have known that Aaron Jones would lead the league in Yards Per Carry for most of the season only to give way to Jamaal Williams due to a knee injury.

Bask in the glory

From Week 1 and for the better part of the 2018 fantasy regular season (aside from bye weeks) Patrick Mahomes, Deshaun Watson, James Conner (pre-injury), Eric Ebron and George Kittle were automatically in my lineup. The trick for me was trying to find the right combination each week for my other 6 slots.

Come playoff time I started leaning on those I had acquired throughout the season, like Damien Williams, Jaylen Samuels and Alshon Jeffrey. Each came through with huge games which helped ensure my victory in the Semifinal round in Week 15 of the NFL Regular Season. Complete unsung heroes should have been my team name.

I contradicted myself all week leading up to the title matchup and reached out to those I respect most within the fantasy football community for their opinions and thoughts.

I was about to face the second-highest scoring team in the league, a roster loaded with studs like Alvin Kamara, Tyreek Hill, Joe Mixon, David Johnson, Phillip Lindsay, Allen Robinson, and even Melvin Gordon to name a few. I was projected to lose by 7 points 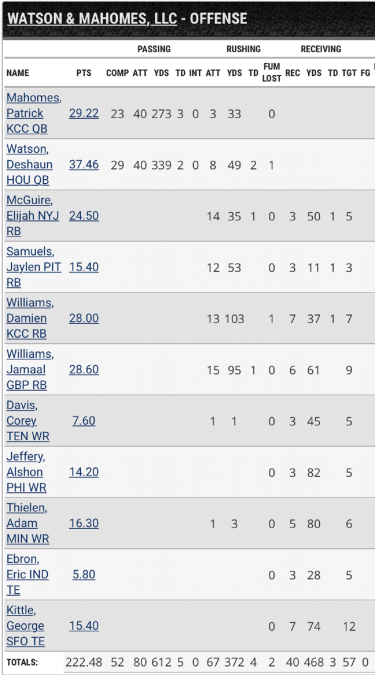 I walked away from the matchup a 42.7-point winner (222.48 to 179.78). The fact remains that however unorthodox your approach may be and no matter the ridicule you may get – when you stand by your moves and trust your own process – the results couldn’t be more satisfying. This is what it’s all about, building your team, your way and giving it your best shot.

Finally, before the combine even kicks off – good luck to all of you out there – I look forward to the task of producing content that causes you to think for yourselves throughout the season as you make roster decisions. Remember you’re the one who ultimately hits ‘submit lineup’.

View all posts by Rob Grimwood