Well, we’re past halfway mark of the Regular Season (sadly), but the Volume Takeaways are always here to help you keep in touch will all of the relevant Volume stats for each week!

This week, we will analyze both weeks 8 and 9, and hopefully it helps you enhance your Fantasy Football teambuilding even more in order for you to win a title!

Since this article is going to be longer than usual, we will not break the Red Zone data down – as the worksheets are very visual and may be clarifying by themselves. 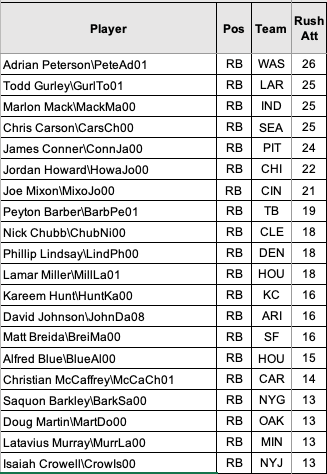 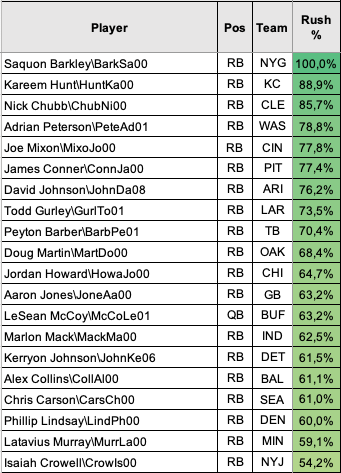 Adrian Peterson was the leader in Rushes of NFL for the second straight week on Week 8 – amassing 149 Rushing Yards and a TD, while adding a 7-yard reception and another score. Talk about a comeback season from the Vikings’ legend…

Todd Gurley, Marlon Mack and Chris Carson were close runners-up with 25 carries each – with Mack scoring twice from the ground – and James Conner closing the Top 5 with 24 rushes – amassing 146 yards and also two scores.

Jordan Howard (22 carries) came back strongly after some low-volume weeks, while Joe Mixon (21 carries) also made a strong showing – 123 rushing yards and 2 TDs.

Saquon Barkley monopolized the rushes for the New York Giants, while only Kareem Hunt (88.9%) and Nick Chubb (85.7%) topped the 80-percent mark. 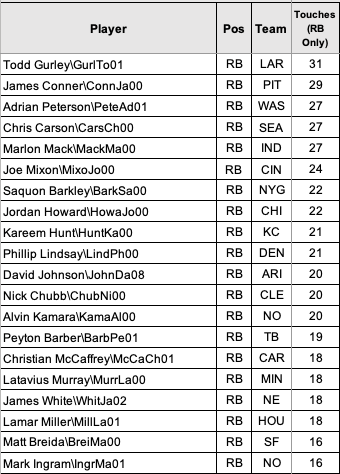 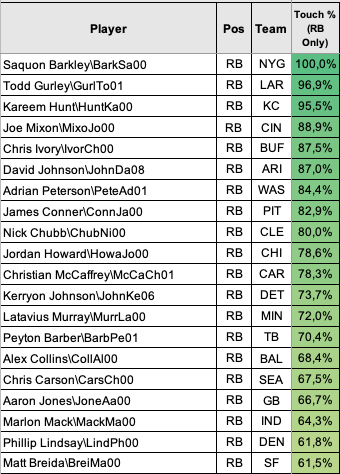 Adding 6 receptions to his 25 rushes, Todd Gurley led the league in touches on Week 8 (while scoring from a catch), while also keeping a strong 96.9% of his team’s Touches.

Conner (29 touches – 82.9%), Peterson, Carson and Mack (27 touches each) capitalized on their strong showing on the ground to round out the Top 5 in Touches.

Some other guys stood out from the pack – like the diminutive Phillip Lindsay, with 21 touches (and 61.8% Touch Share) and Joe Mixon (24 touches for 88.9%) coming back to dominate the Bengals’ backfield once more.

James White is having a true breakout year. On week 8, he continued his amazing air production while leading the league (alongside Mike Evans) with impressive 13 targets – while catching 10 balls for 79 yards.

Another RB had a very strong showing in Kerryon Johnson – who, along with Golden Tate, Larry Fitzgerald, Jarvis Landry and Jordan Reed (38.7% of the Redskins’ targets) – had 12 targets. Willie Snead, Stefon Diggs, and Odell Beckham were also close, with 11 targets each.

Some unusual names were at the top of the Target Share list this week: for example, Jermaine Kearse held a comfortable first place with an impressive 43.5% of the Jets’ targets. Another one (the third place) is Kendrick Bourne, who probably won’t make another appearance on this weekly article, with 10 targets and a 37% Target Share. 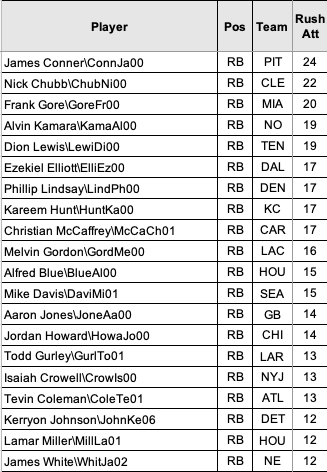 Talk about that guy James Conner! He led the NFL in Rushing Attempts again in Week 9, with 24 carries (and 107 yards). Fun Fact: Conner is tied with Kareem Hunt for the second place in the 2018 Regular Season with 151 carries, while holding the second spot for yards – 706.

Nick Chubb had great volume last week, with 22 carries – for 85 yards and a score – and the NFL’s Methuselah, Frank Gore, came in third place with 20 rushes – although not so effective, with only 53 yards. Alvin Kamara and Dion Lewis (19 carries) close out the Rushing Attempts Top 5, with Lewis taking (apparently) the Titans’ backfield by storm, vastly outperforming Derrick Henry. 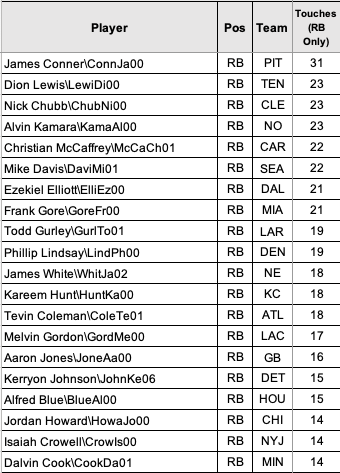 Conner (I know, it’s getting repetitive) was a clear-cut leader in Touches for the last week, with 31 (and 96.9% of the Steelers’ touches). He also scored once from a reception.

Lewis, Chubb and Kamara – with 23 Touches each – Christian McCaffrey and Mike Davis – 22 each – and Elliott and Gore – 21 touches each – were the other standouts from last week.

Michael Thomas channeled his inner Joe Horn impersonation, earning 15 targets from Drew Brees – while adding 211 yards, one score and a heck of a celebration!

The always impressive Hopkins came second, alongside another unusual name – called Maurice Harris, nice to meet you all! – with 12 targets each. Hopkins, by the way, scored again (surprise!) while earning 52.2% of Deshaun Watson’s passes last Sunday! I don’t believe there will be another mark like this for the rest of the season…

That’s it for Weeks 8 & 9 Volume Facts and Takeaways. Thank you very much and I hope to see you after Week 10!

View all posts by Gabriel Cabistani