First and foremost, I genuinely hope everyone had a successful week one on DraftKings and I was super excited to break down week two as we progress through the early stages of what is sure to be an amazing 2018 NFL season.

In this article, I’ve provided a simple and easy to read cheat sheet to help you organize your lineups for DraftKings Sunday Main Slate, as well as offering up some super punt plays at wide receiver so you can cram as many studs into that massive GPP tournament as you can, if that’s your style.

As far as cash plays go, I’m going super conservative this week, only using proven QB’s & their top correlating WR’s in good spots. Considering we don’t have enough games played yet to clearly identify solid trends that typically will start to take shape around week 4.

If you played Ravens DST on Thursday night against Andy Dalton and A.J Green, then you know exactly what I’m talking about when I say that. Alvin Kamara, Todd Gurley, James Conner, and Rams defense are the plays I’ll have exposure to in both GPP’s and cash games because if they hit and you don’t have them, your day could be over before it begins. Best of luck to everyone this week and I hope to get some positive feedback about lots of money being won! 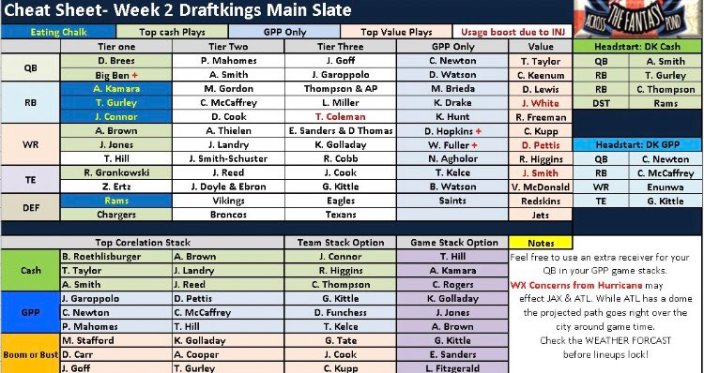 The ‘One Percenter’ play

Every week we see players who score six or more times their salary at a minimum price and leaves most of us wondering how they ended up in any line-up to begin with. Well I’m here to share with you my week two top “One Percenter” plays, which are very high risk, high reward plays.

Allison is probably in the best spot of all the Green Bay pass catchers this week. Drawing shaky left corner Trae Waynes in spread formations when Randall Cobb moves to the slot. Stud safety Harrison Smith likely will be tasked with containing red zone brute Jimmy Graham. Leaving Allison plenty of one on one time with Waynes in a game Green Bay will be massively overlooked against a stout Vikings defense.

Thomas caught a red zone touchdown pass from quarterback Patrick Mahomes last week in Los Angeles. While he only received two targets during the contest, most won’t remember Thomas’ 57-yard fourth quarter bomb in last year’s matchup with the Steelers. Currently, Chris Conley is listed as the Chiefs third receiver so there is a very high probability that Thomas will dud out. However, Andy Reid is the type of coach who’ll play the trends to gain an edge for the win and if Thomas hits, he’ll be a lock for sub 1% ownership.

Rogers received only three targets for 18 yards in the Colts loss to the Bengals last week. However, week two presents a serious challenge for Indianapolis’ outside receivers and will likely funnel Andrew Luck’s targets into the middle of the field and doubling Rogers week one target share in the process.

Higgins caught one pass on four targets for 38 yards last week but what really catches my eye is the fact he was on the field for 61% of the Browns offensive snaps. Odds are stacked against Cleveland’s defense slowing down Saints high powered offense and Higgins matchup on Kent Crawley is one that screams sleeper as Tyrod Taylor has loved the deep right ball in the past.

While Hunter only made one catch for six yards against the Browns in week one, he still surprisingly saw five targets in the game and with a 53.5 Vegas line for the Steelers matchup with the Chiefs at home. I think he’s worth the punt at minimum salary in a game that’s going to have heavy projected ownership on both teams offenses.

DISCLAIMER: Odds are stacked against these guys succeeding so be sure you understand that there is always the possibility of them scoring ZERO points for your tournament lineup. Play at your own risk and do your own research before using them in your lineups.

View all posts by Rob Grimwood