As preposterous as it might seem, I’ll start this series by citing the legendary Matthew Berry, when he gives a brief concept about what’s the main goal on fantasy football:

“At a fundamental level, fantasy football is entirely about minimizing risk and giving yourself the best odds to win on a weekly basis.”

At The Draft Day Manifesto: Why a weekly focus is key to fantasy football success – August 1st, 2018. http://www.espn.com/fantasy/football/story/_/page/TMRDraftDayManifesto18/strategy-risk-management-historical-trends-tips-how-draft-fantasy-football)

That being said, a quick question comes to mind: how the heck can you minimize risk as far as running backs are concerned? Well, I don’t think that a totally foolproof fantasy football points predictability device has been created yet. If you know any, let us know as soon as possible!

All jokes aside, it seems pretty obvious to the average man that the more you have the opportunity to do something, higher are the chances that you do this.

Even though football is more directed towards a “pass-heavy” game nowadays, rushing yards and touchdowns still count towards your fantasy teams and consistent producers at the running back positions become more and more rare with each passing year.

In this article, we’ll try to prove that, by way of worksheets, graphs and other types of correlations. Volume is key for a running back to produce in fantasy (be it rushing or receiving wise).

For starters, it is important to determine which stats are relevant as far as volume is concerned — rushing attempts, targets and receptions. As we said earlier, the more opportunities one has to do something, the more likely he will succeed.

On the list below, we look at the touches/game leaders in the 2017 NFL Season. All of these players had more than 15 touches/game (in this chart Jay Ajayi in his Dolphins days and Adrian Peterson in his Cardinals tenure were included). For the record, touches = rushing Attempts + receptions. Also, we’ve only considered players who had more than 50 total touches last season.

Looking at the Top 10 PPR running backs last season, only Cook and Elliott were not present (coincidentally, both did not play the full 16 game-season), as Christian McCaffrey was the only “outsider” who broke the Top 10 list with 229 total points (good for 10th).

This is a clear example of how volume will almost certainly dictate production for fantasy football purposes – in this game, not only TD’s translate to points, but also rushing and receiving yards and in PPR formats, receptions too. In real life, only scoring means scoring – I know it sounds redundant, but that is the way things go…

Now, we bring you some graphs that might tell you a thing or two about how volume relates directly with production in fantasy circles. 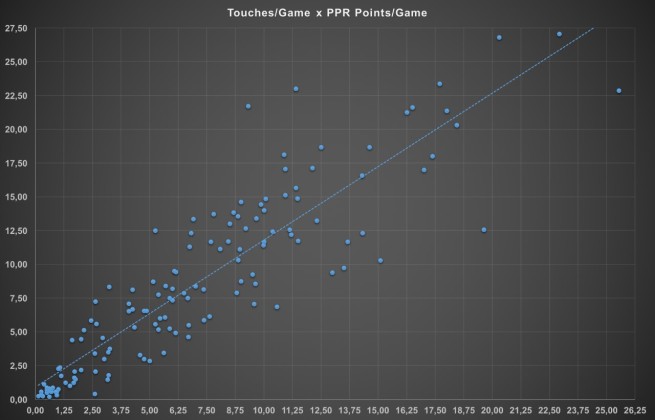 This graph correlates the Adjusted Rushing Share a player had with his team with the total standard points/game he had.

The relation is pretty obvious by the shown scattered points. Of course, not only rushing yards count towards fantasy points, as said below. But, aside from some aberrations – such as the aforementioned Kamara and Ajayi during his time with the Dolphins –  this graph shows that the more rushing share a player had, the more he produced on fantasy squads.

Here are the top ranked RB’s in Adjusted Rushing Share:

7 of the 10 aforementioned players were present at the Top 10 Standard Points Ranking (again, Cook and Elliott, and in this case, Ajayi, as a result of massive underperformance and bad game scripts, specially in Miami).

Of the other three players: both Saints backs were among the Top 10 Standard Point RB’s (Kamara and Ingram, thanks to an otherworldly fantasy season) and Fournette, who ran for 51.34% of the time for the Jacksonville Jaguars and was a TD magnet – he found pay-dirt nine times last year.

On to the next graph…

This graph shows the correlation between touches/game (which involves receptions) and PPR PTS/G.

The graph design is very similar to the other one, aside from some freaks that had absurd efficiency in their per touch basis. Some of the examples are listed below in order:

Did you notice a trend? Yeah, all of them were receiving backs and almost none of them (aside from Gurley and arguably McCaffrey) carried a large workload.

These are the only players that had efficiency (points/touch) above one point per touch. The ONLY player that was featured in the top volume players was, of course, the RB1 of 2017, Gurley.

I know that these modest graphs and the data shown is not a massive demonstration, but I guess it can be taken into consideration about how volume is key to a RB’s fantasy production.

As shown, there might be another Kamara 2.0 in the 2018 season, but these kinds of performances are outliers. Therefore, do not count for massive production on players that may not have a large rushing share or general touch share in his backfield.

Hopefully, this modest article helps you take your decisions in your re-drafts, rookie drafts or keeper decisions – and always, always, ALWAYS, when drafting RB’s, look for the ones who might get a good share of rushing attempts, and also the ones who get passing work!

Hope you enjoyed it, and I’ll see you in Parts 2 and 3 — wide receivers and quarterbacks.

View all posts by jamiezadow